In December 1962, Leonardo Da Vinci's Mona Lisa set sail from Paris to New York for what many knew would be the riskiest art exhibition ever mounted. The fragile painting, sealed in a temperature-controlled, bulletproof box, traveled like a head of state accompanied by armed guards and constant surveillance. 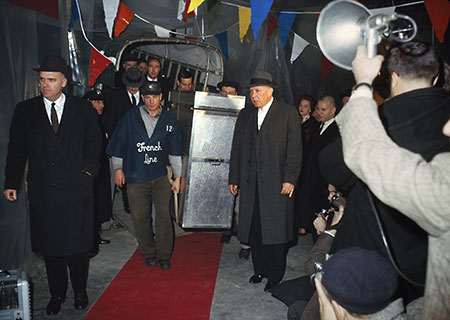 The U.S. Secret Service escorted the Mona Lisa along a red carpet as the painting was removed from the SS France at New York Harbor on the morning of December 19, 1962.

The driving force behind the famous painting's high profile visit was First Lady Jacqueline Kennedy, who convinced French Cultural Minister Andre Malraux and National Gallery Director John Walker to share the masterpiece with the American people. She overcame the fierce objections of art officials who feared the journey would ruin the world's most celebrated smile, and “Lisa Fever” soon swept the nation as nearly two million Americans attended exhibits in Washington, D.C. and New York City. It was the greatest outpouring of appreciation for a single work of art in American history. And as only Jacqueline Kennedy could do, she infused America's first museum blockbuster show with a unique sense of pageantry that ignited a national love affair with the arts. 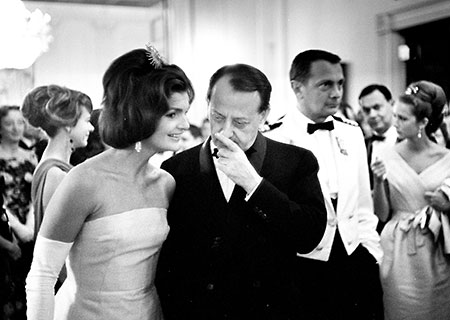 Following a White House dinner in his honor, French Cultural Minister Andre Malraux is said to have whispered a promise to Mrs. Kennedy that he would lend her the Mona Lisa.

All New Edition Published by The White House Historical Association 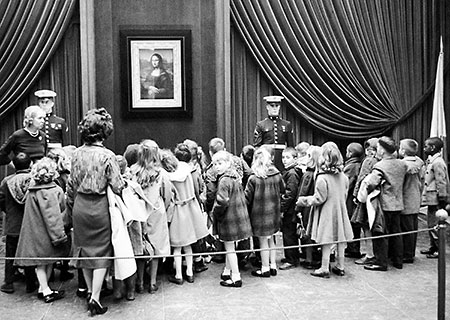 Guests of all ages visited the National Gallery to view the painting.

“The non-fiction book reads like a daring art story that somebody had to make up with two beautiful ‘women' heading the cast (the Mona Lisa and Jackie K). The incredible story of how Jackie Bouvier brought ‘culture' to a White house that hadn't had any since Thomas Jefferson left it. Margaret Leslie Davis is known for her fascinating histories and this is a recent one with a gloss, chock-full of glamour, big rich names, super philanthropy, a dedicated woman who was willing to trade her charm for a few Cezannes in the White House and the most famous painting in the world for the National Gallery… An engaging and dynamite story… This is a really important little addition to American museum and art history.” 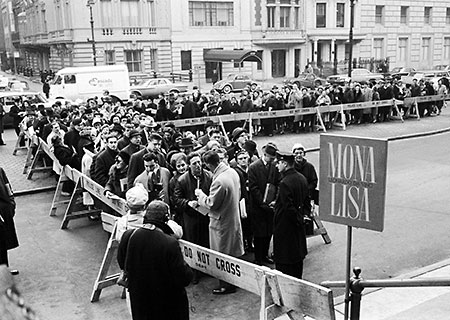 Thousands of visitors waited in line for the doors to open when on February 7, 1963, the Mona Lisa went on view to the public at the Metropolitan Museum of Art. More than one million New Yorkers went to see the painting during the month-long exhibition, enduring winter cold and rain, as “Mona Mania” swept the nation.

“Margaret Leslie Davis' Mona Lisa in Camelot… brings back all the glamour and high hopes of the Kennedy White House with the story of Jacqueline's successful campaign to import Leonardo Da Vinci's Mona Lisa to the United States… Davis' description of the glittering White House dinner the Kennedys arranged in order to woo Malraux makes you dizzy with nostalgia for a first lady with a sophisticated appreciation and respect for the arts…  I would call Mona Lisa in Camelot escapist nonfiction-except that it's firmly grounded in historical fact, and its triumphant heroine, though she's the stuff of fantasy, is as real as you and me.” 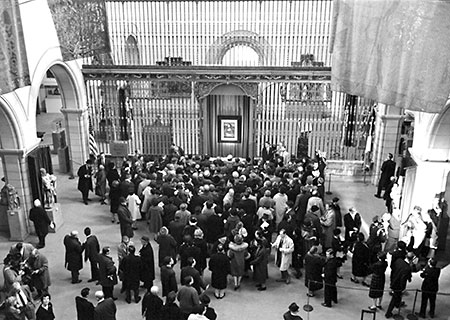 Safeguarded behind bullet proof glass the painting was handsomely displayed in the museum's Medieval Sculpture Hall.

“No detail goes unexamined, no gesture unexplored in Margaret Leslie Davis's impassioned account of Mona Lisa's historic journey from France to America. Much more than a story about the travels of a world-famous painting, this is a tale of inernational diplomacy, personal relationships, cultural symbolism and – most of all – the power of two great ladies.” 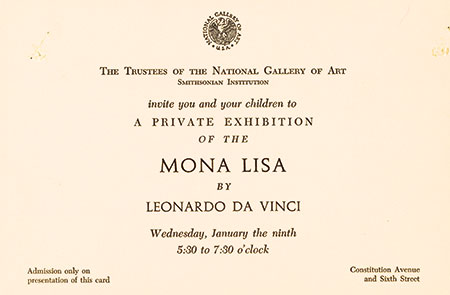 “This distinguished historian has written a charming and painstakingly researched account of Jacqueline Kennedy's pivotal role in bringing the Mona Lisa to Washington, an achievement that signaled an American cultural awakening.”

— Lou Cannon, author of President Reagan: The Role of a Lifetime 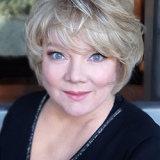 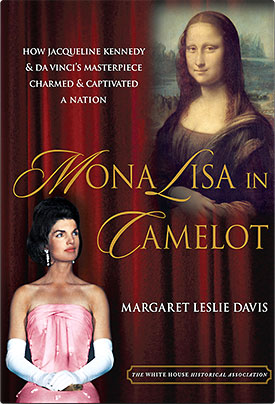 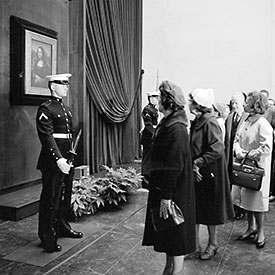 U.S. Marine Guards with bayonets kept watch in the National Gallery. The hygrothermograph, the instrument used to record climate conditions inside the museum, is visible beneath the painting.

“[Davis] offers an intriguing sketch of Jackie – a woman as enigmatic as the Mona Lisa herself.” 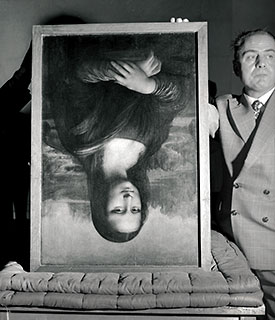 Officials at the Louvre prepare the Mona Lisa for her trip to America.

Transporting the painting by air was considered too dangerous and French officials insisted that the painting travel by ocean liner. 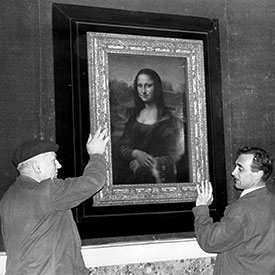 On December 14, 1962, the Mona Lisa by Leonardo da Vinci was removed from the wall at the Louvre in France, in preparation for transport to the United States. The painting was packed for transport in a fireproof and unsinkable steel trunk and loaded aboard the French liner SS France for its journey to America.

“Mona Lisa in Camelot is well written, extensively researched and meticulously rendered – a masterpiece in its own right.” 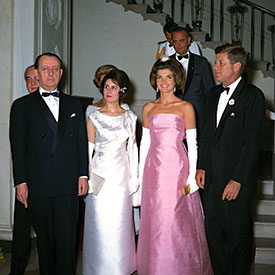 President and Mrs. Kennedy posed with their guests the French Minister of Culture and Mrs. Andre Malraux at the foot of the grand staircase on the evening of May 11, 1962, prior to a state dinner in their honor. The menu selected by Mrs. Kennedy included an elegant selection of French dishes.

“Jackie lovers will be thrilled.” 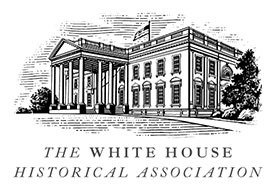