Margaret Leslie Davis's riveting biography follows Edward Doheny from his days as an itinerant prospector in the rugged western territories into the jungles of Mexico, where he built an oil empire that helped inaugurate a new era of petroleum.

But it was a tale that ended in tragedy when – at the peak of his power and prestige – Doheny became embroiled in the notorious Teapot Dome scandal and was charged with bribing the U.S. Secretary of the Interior.

Doheny’s story is one of enigmatic fate — poverty and wealth, renown and disgrace, fortune and tragedy — a tale of the skeleton, la calavera of Mexican lore, ever present at the banquet table, a reminder that fortune has a dark, hidden side. 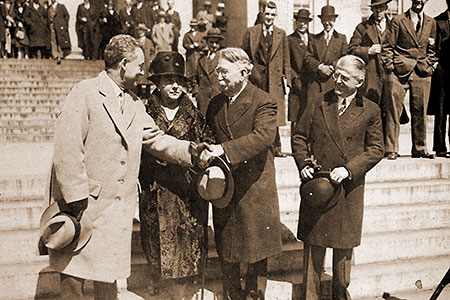 Attorney Frank Hogan with Edward and Estelle Doheny on the courthouse steps following Doheny's triumphant acquittal on bribery charges in 1930.

“In terms of family saga, the Doheny story is the Ariadne's thread of Los Angeles history. It is perhaps the best pathway both into — and out of — the labyrinth of the founding era. Thanks to Margaret Leslie Davis's Dark Side of Fortune, the full story of this previously mysterious Los Angeles Founder, his determined wife, and their murdered son stands revealed in all its resonant complexity. Ours is rapidly becoming a golden era of California biography, and here is further proof.” 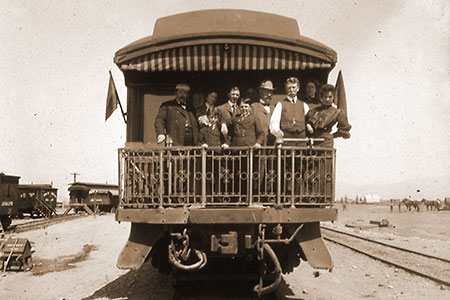 Edward and Estelle Doheny's wedding day, August 22, 1900. A justice of the peace in New Mexico Territory presided over the ceremony inside Doheny's Pullman railcar, later christened the “Estelle.”

“This biography of oil tycoon Edward L Doheny reads like a novel and fittingly so, for the life story of the brilliant, driven entrepreneur is the stuff of fiction… Davis crafts a spellbinding account of Doheny's rise to fame, power and fantastic wealth — and his fall from grace as a key figure in the Teapot Dome scandal that shattered the presidency of Warren D. Harding. This fascinating narrative will enrich the historical record while appealing to casual readers who enjoy tales of wealth, fame and political intrigue.” 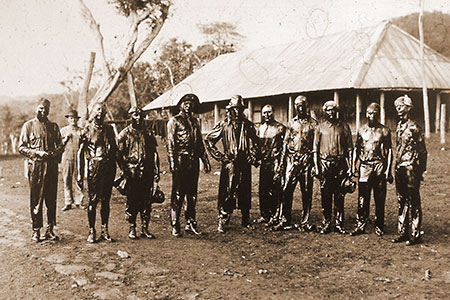 The workers who brought Cerro Azul No. 4 under control. The deluge from the oil saturated the land and everything on it within a two mile radius.

“Davis delivers both the definitive biography of Doheny and a good-faith apologia for the man often labeled as the icon of unbridaled American greed.” 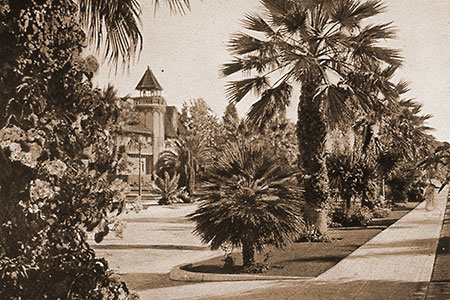 “Dark Side of Fortune is a brilliant biography of the tarnished oil tycoon, Edward Doheny, whose importance as an American industrial pioneer ranks with such better-known figures as Rockefeller and Carnegie. Margaret Leslie Davis has written a superbly researched and definitive account of the founder of the modern petroleum industry in California and of his machinations in Mexico and involvement in the notorious Teapot Dome scandal. Davis has a sympathetic understanding of Doheny but tells his story warts and all. He emerges from this compelling biography as a conflicted man who is at once a hero and a scoundrel – and above all an American original who seems larger than life.”

Author of ‘President Reagan: The Role of a Lifetime' 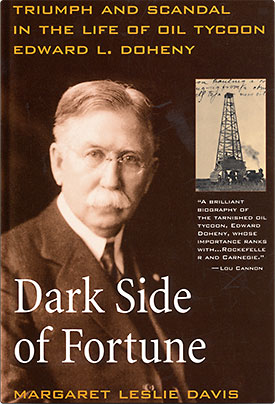 “Having admired Margaret Leslie Davis’ Rivers in the Desert, I eagerly plunged into this companion tale of a California titan-and couldn’t bear to put it down. One could never invent such a story and make it credible; only a superior biographer (and researcher) could have brought it to the printed page with such rich and revealing detail.” 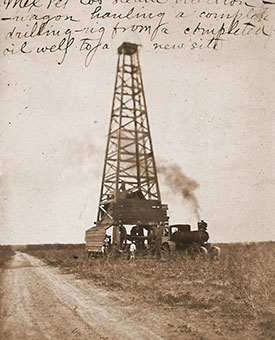 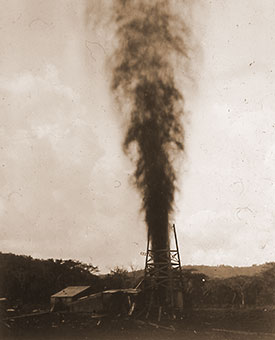 Cerro Azul No. 4 before it was brought under control. On February 9, 1916, it erupted into a gusher that exceeded the output of all other wells in the Mexican fields. Overnight, Doheny became one of the world’s wealthiest men.