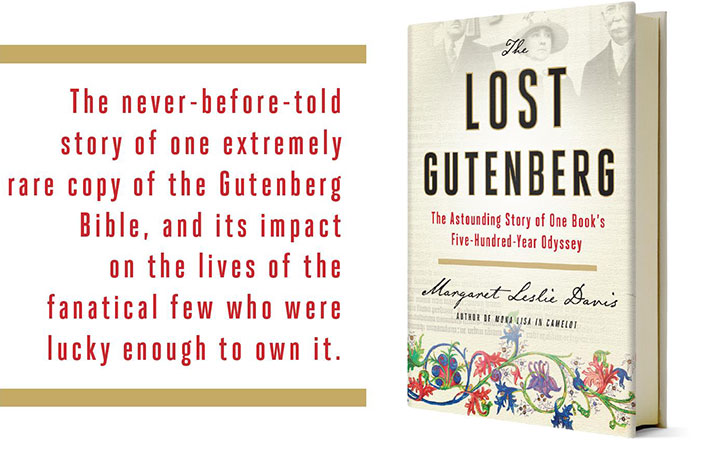 “A lively tale of historical innovation, the thrill of the bibliophile’s hunt, greed and betrayal.”

“[E]ngrossing reading … Davis does a fine job telling a fascinating story that touches on the origin of books, the passion of collectors, the unseen world of rare-book dealers, and the lives of the super-rich, past and present. A great read for any book lover.”

For rare-book collectors, an original copy of the Gutenberg Bible — there are only forty-eight in existence — represents the ultimate prize. When Estelle Doheny, the eccentric widow of oil tycoon Edward Doheny, finally obtained an original copy, it was the culmination of a forty-year pursuit. Estelle, the first woman and perhaps the most devout owner of the Bible, would be its last private owner as well. After her death, the unique Bible would go on to enable scientists — using the very machine that first isolated plutonium for the atomic bomb — to make the most important advance in understanding the first printed book. 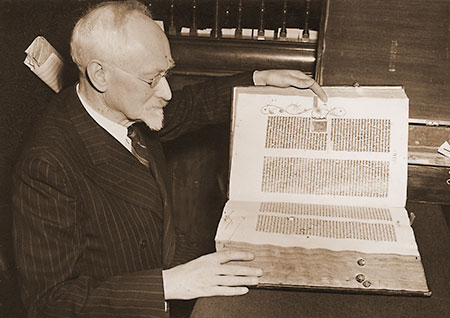 London Book Dealer Ernest Maggs gazes at the pages of the Gutenberg Bible following the 1947 auction. The vellum thumb markers used to designate sections of the bible are visible along the book’s foredge.

“Bibliophiles love books, and none more than the book collector’s dream of dreams, a Gutenberg Bible. Margaret Leslie Davis tells the improbable, tri-continental odyssey of Gutenberg no. 45 with the skills of a practiced biographer, but the life of this book is also the lives of those who owned it and then lost it, and these lives—especially the life of Estelle Doheny of Los Angeles—Davis tells not just with skill but also with sympathy and even love. A richly informative but finally a deeply moving story.” 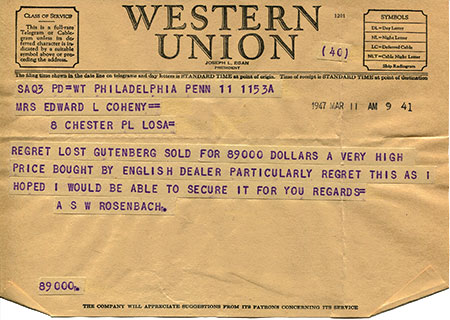 Telegram from American Dealer A.S.W. Rosenbach to Estelle Doheny informing her that the Gutenberg Bible she coveted had gone to another book dealer in March, 1947. 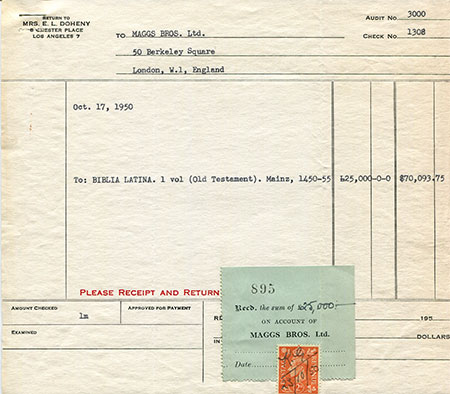 The Bill of Sale for the Gutenberg Bible dated October 2, 1950. Estelle Doheny had given up on ever owning the Bible when the copy she had lost suddenly became available. Thanks to an unusually strong dollar, she was able to claim one of civilization‘s great artifacts for a bargain price.

In The Lost Gutenberg, Margaret Leslie Davis richly recounts five centuries in the life of this copy of the Bible, from its very creation by Johannes Gutenberg in Mainz, Germany; to its ownership by the British heir to the Lea & Perrins Worcestershire sauce empire; to its brush with one of the most notorious crimes of the twentieth century, the Teapot Dome scandal; to its ultimate resting place, in a steel vault in Tokyo.

The Lost Gutenberg draws readers into this incredible saga, inviting them into the colorful lives of each of its collectors along the way. Through vivid storytelling and unprecedented access into private records, Davis offers a unique and riveting history for bibliophiles and book lovers combined. Exploring books as objects of desire across centuries, Davis will leave readers not only with a broader understanding of the culture of rare book collectors, but with a deeper awareness of the importance of books in our world.

“This wonderful, elegant story, which reads like a thriller, will delight anyone who loves books, collecting, history, and biography. The Gutenberg Bible, its hero, travelled across several continents and reached Los Angeles more than half a century ago. It was the object of admiration, greed, and speculation, but also of brilliant scientific discoveries. Populated by remarkable and quirky individuals, their passions and tragedies, this superbly researched historical gem is a veritable page-turner.”

Listen To a Sample From The Audio Book:

“An addictive and engaging look at the ‘competitive, catty and slightly angst-ridden’ heart of the world of book collecting… The Lost Gutenberg reads like a comedy of manners starring the cast of an Ayn Rand novel… It’s improbable and riveting. The journey of one of the most important books in human history is daring and endearing, a fitting period on the sentence Gutenberg himself began with his world-changing invention.”

“What’s truly surprising about The Lost Gutenberg is that Davis makes the 500-year journey of this one book more exciting than any spy novel. For the imaginative Hollywood producer, this book’s life story could provide the basis for a richly enjoyable big-budget blockbuster. The action travels across centuries and moves from England to Los Angeles to Tokyo, bringing together the avaricious, duplicitous and deeply religious, all driven by the same desire: to own a copy of one of the most famous books in the world.”

“A fluently told, well-executed history… This is, at heart, and with heart, an entertaining and insightful human story of obsession about books, and a telling examination of what inspires those who catch the collecting bug.” 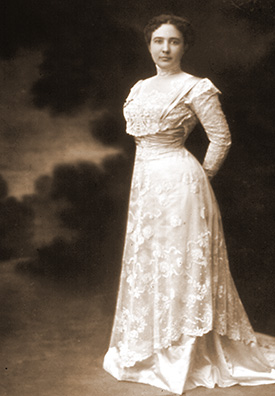 Estelle Doheny soon after her marriage to oil tycoon Edward Doheny, circa 1900. She was the unseen telephone operator connecting his calls to oil investors and Doheny claimed he was entranced by her voice. They married after a short courtship. 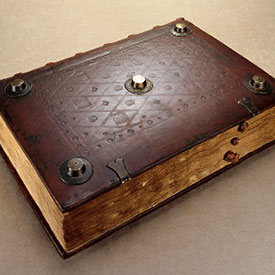 The cover of the Doheny Gutenberg Bible #45 in its original fifteenth-century binding of age-darkened calfskin stretched over heavy wood boards, circa 1456.

“The depth of Davis’ research cannot be understated. The writing in this book is straightforward and, at times, even heartbreaking, but outstanding reporting lies at its core… The Lost Gutenberg pulls readers into a five-century saga, plunging them into the minds of those who desired the Bible and the prestige that came with it. This makes it a book about not only Number 45 and its owners but also a narrative that explores our collective obsession with art, technology, change, and history.” 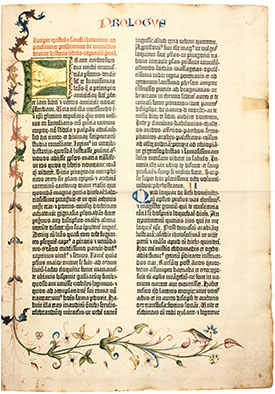 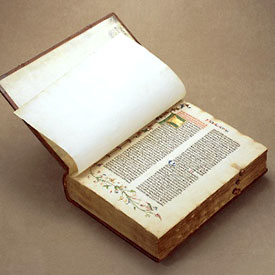 Number 45 was the first Gutenberg Bible to enter the digital frontier. No longer a three-dimensional book of ink printed on paper, the virtual Gutenberg is now a twenty-first century creation of the digital age. Today, Number 45 resides in a library vault at Keio University in Tokyo, Japan.

“Book collecting might seem a preoccupation of a limited cadre of obsessive, pedantic academic wannabes, but Davis makes bibliographic history utterly page-turning and absorbing, with intrigues, devastating tragedies, vast fortunes, embezzlement, a seductively voiced telephone operator, the Teapot Dome scandal, murder-suicide, earthquake, and even Worcestershire sauce. Davis’ brilliantly told story features outsize characters but focuses primarily on Estelle Doheny, the Los Angeles purchaser of Number 45, who, in one further irony, held in her hands this long-sought volume only after she had turned nearly blind.” 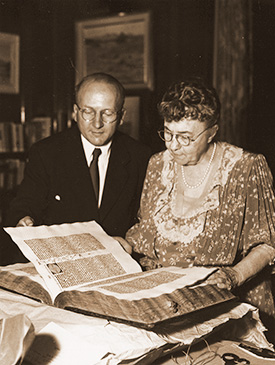 Estelle Doheny with Robert O. Schad, curator of rare books at the Henry E. Huntington Library examine the Gutenberg Bible soon after its arrival in Los Angeles in October, 1950.

“The Lost Gutenberg has two protagonists: a singularly beautiful copy of the Gutenberg Bible – known as #45 – and the California heiress who emerged from scandal to chase it. Along the way, Davis takes in the larger-than-life stories of the aristocrats, libertines, billionaires, and bibliomaniacs who all competed to own this unique piece of literary history. A fascinating exploration of the shifting value we place on rare books, and the shifting wealth and power of those who hunt them.” 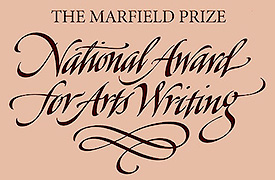 “A gripping account of the importance of books as cultural artifacts and of one particular work that transformed the world.”

“Heartbreak of the $100 million blockbuster: Six centuries old, it’s the best-preserved Gutenberg Bible in the world. And its extraordinary history is a thrilling page-turner.” 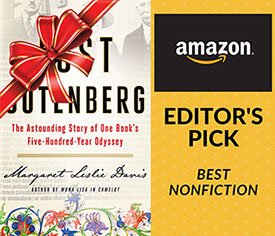